Ah now this was a fun one!  I had gotten seeeeeeecret word from the heraldic staff of Kenric and Avelina that this was likely happening.  As Vice President of the Matthias Fan Club and his consort, I asked Nest for this assignment when it became available.

Fun facts about this project:
- I hemmed and hawed about which source to use and nerded out a bit with some fencers about German fencing manuals.

- Painting in 90+ degrees makes the paint dry REALLY fast which is very frustrating.  Holy crap it was hot that day.

- Alys is a wordsmithing saint and Eva's "messy-terrible "calligraphy is better than my calligraphy on any given day and she's a perfectionist.

- I picked this picture because it reminded me of LARPing and "losing an arm" while in a fight.  It narrowly won over the picture of someone getting bashed in the face with a buckler that Thyra really liked.

- I worked on a portion of this scroll at Matthias and Thyra's house with Matthias RIGHT THERE.  After all this was for "some dude with a weird name" *shrug* and I "wasn't going to see this scroll again anyways so meh". :P  Matthias did offer a few compliments on the illumination as I was working.

Without further ado - the uncleaned up pic Eva sent me right after she finished her calligraphy (which I think is still awesome). 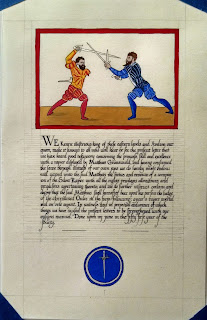 Posted by ladydarkwolf at 6:16 AM